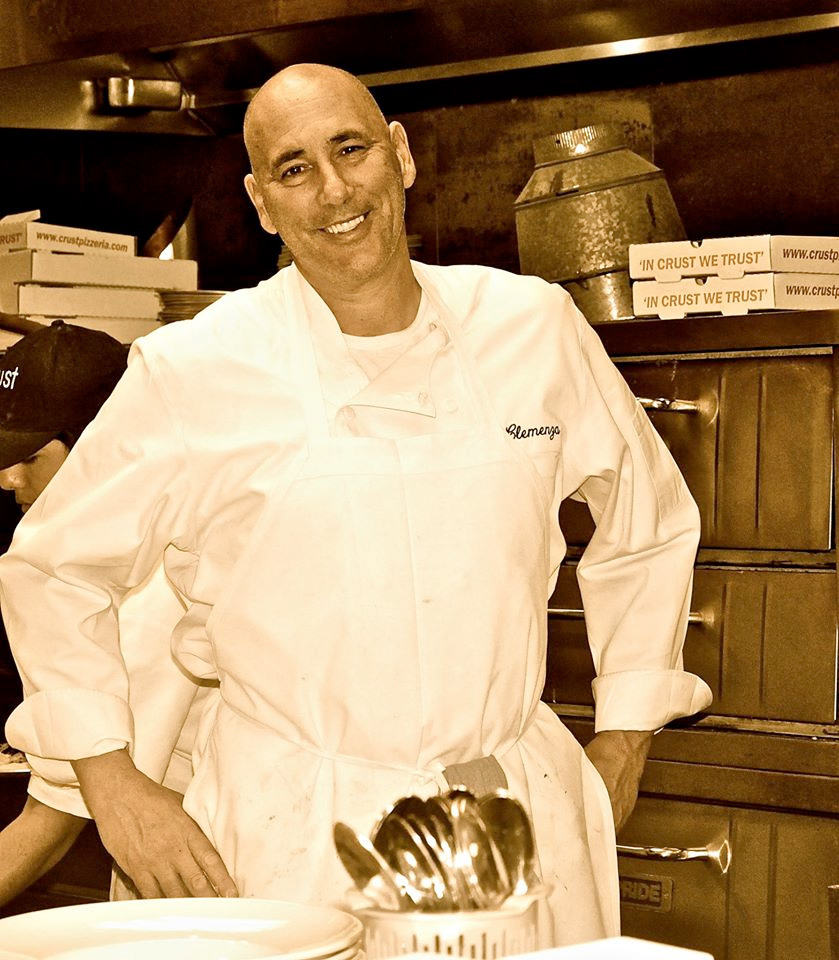 Owner of “Crust” in Carlsbad, California is executive chef, Charlie Meola. With over forty years of experience, this Sicilian pizzaiolo from New York City has brought his famous authentic artisan pizzas to coastal California. Six days a week you can find Meola immersed in dough and a myriad of fresh, local and some imported toppings that keep his patron’s mouths watering for more. When it comes to pizza, Meola is a purist, making unforgettable pizzas, with every dish, aiming to enhance the true flavors of superior ingredients. Meola’s magic touch infuses his pizzerias with soul and his approach to pizza creation often provokes an emotional response from his diners.

It was at the young age of just twelve that this preeminent chef’s curiosity and passion for pizza-making began. He first rose to prominence by a chance encounter with the owner of a local pizzeria where Meola’s successful career as a master pizza chef began. Meola started as a dishwasher but it wasn’t long after that he was hit with a big dose of culinary curiosity and verve.

Providing strong leadership and support to the pizzeria, he rose swiftly through the ranks and by the time he was ready to head to college, he was running the place. It was this first experience that Meola honed in on his knack for making pizza turned culinary skills and found a deep passion for making something that people haven’t had before and wouldn’t soon forget.

Meola left New York City for Tucson where he spent time getting an education at the University of Arizona. He was also busy following his passion for pizza-making after buying his own pizzeria called Upper Crust Pizza in Tucson, AZ. His strong repertoire for hand-tossing pizzas, gained him much success and he soon made a name for himself, even being flown in on many occasions to make his pizza masterpieces for the renowned oceanfront luxury resort, Montage Laguna Beach known for its exquisite dining. Soon Meola owned several pizzerias in Tucson and they did very well as he infused personality into each place.

Meola’s passion has always been contagious and he was well-known for mentoring his staff, always passing down the craft of making authentic artisan pizzas. To this day many of the pizzerias in Tucson (about 75%) are owned by former employees of Meola. “Creating high quality pizza is not best learned in an empirical way,” says the master chef. Meola’s restaurant empire has since grown to include Upper Crust Pizza, Pane e Vino, Cotton Row Restaurant and now an upscale neighborhood pizzeria called Crust in Carlsbad, California.

After being recognized by many publications throughout his career, recently the San Diego Union-Tribune named Crust Pizzeria as having one of the “The Top 25 Pizzas in San Diego.” Journalist Pam Kragen said that the, “hand-tossed, not-too-thin, not-too-mushy crust is the star.” Meola really has blessed Southern California with his modern twists on the traditional pizza classics that we think even the La Vera Pizza Nepolitana would appreciate. His focus now is the same as it has always been, to make a better product and to create an experience for his patrons.

At a young age, Meola learned firsthand how a pizzeria works and the role that a restaurant plays in a community. Meola finds great joy from creating lasting memories through his pizzas and bringing people together while giving back to the community. Meola donates to many of his local schools and sports teams. When you spend time at Crust Pizzeria, you feel like a part of his restaurant family.

So, stop in any night and come say hello to Master pizza chef, Charlie Meola! Make sure to grab a handcrafted, Artisan New York style pizza pie with blistering cheese, that’s crispy on the bottom, slightly chewy on top with tinges of a blackened edge, now that’s amore!